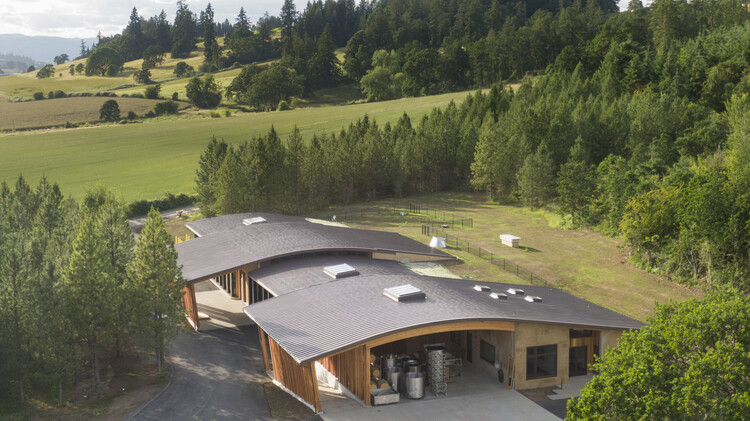 Text description provided by the architects. As Beck Family Estates’ first winery developed outside of South Africa, Abbott Claim is a thoughtful expression in the built form of the rolling hills and beauty of the Yamhill-Carlton region. The project features custom elements such as a living roof, a semi-circular barrel cellar, and an underground wine library lit from an oculus above. Large canopies provide weather protection and screening for the crush pad and mobile bottling line.

Integration with Site. The design concept for Abbott Claim was driven by the owner’s desire to respect the existing character of the site. The design team subtly tucked the building into the hillside, minimizing its visual impact while taking advantage of the ideal aging conditions offered by a below-grade barrel cellar. The team also incorporated materials reflective of the beauty of the landscape. Airfoil-shaped, tilt-up panels were formed with Corten steel that was left in place as the exterior skin. Combined with integrally colored concrete, these materials evoke the color of the native soil, while the airfoil shape of the panels mimics the curvature of the surrounding hills. Care was also taken during construction to protect a large planting of native Willamette Valley Ponderosa Pines.

Design Features. Because the building is largely set into the hillside, every opportunity was taken to introduce natural light into the interior. The airfoil panels are spaced apart to fit narrow, vertical windows between each panel, while clerestory glazing along the exterior fermentation room walls and in the interior office area brings light into all of the inner spaces. Similarly, an oculus above the wine library brings sunlight into the core of the building.

Challenges. Throughout the process, the owner challenged the design team to conceal as much of the utility piping as possible. This was no easy feat for a production facility with myriad mechanical systems and proved especially challenging during construction of the pre-cast elements, which needed to incorporate all system components into individual concrete tilt panels and vault sections. The effort required intense coordination between all team members but paid off in the seamless and clean interiors. The fermentation room is largely uncluttered, thanks to concealed mechanical chases on each flank of the room, which are served by hidden below-slab piping. The semi-circular barrel cellar was formed with pre-cast vault sections. Additional pre-cast, halfpipe elements were used to create a chase to conceal sprinkler piping and electrical conduits. As a result, there are no visible conduits, sprinkler pipes, or plumbing within the barrel room vaults.

Resolution. Abbott Claim is an accomplishment in meeting seemingly opposing objectives: to be an efficient wine production and aging facility, but also to have an understated serenity to the whole through its concealed systems. The facility’s form and materials blend with the surrounding hills while not sacrificing any quality of interior materials or natural light. Any one of these objectives could have overshadowed the others, yet the building’s thoughtful siting and design strike a seamless balance.