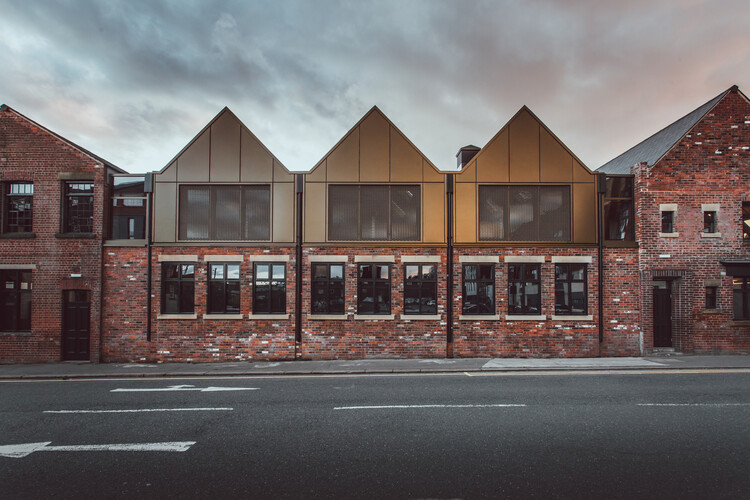 Text description provided by the architects. Albert Works creates a headquarter office that sympathetically builds on Sheffield’s industrial heritage. The project involved the conversion of four disused red-brick warehouses with the integration of a new central open plan infill to create approximately 1,600sqm of flexible workspace for brand and marketing agency, Jaywing.

Jaywing’s brief included workspace to accommodate a large design studio and spaces for teams of accountants, data analysts and management. Albert Works efficiently connects these dynamic working groups within a single studio environment with allowance for future flexibility and expansion.

The original character of the existing buildings has been sensitively restored using traditional trades and materials. The form of the new exposed steel infill frame creates three bays that are pulled away from the existing buildings to create an integrated perimeter walkway and service zone. Externally, the new build elements are expressed with the use of bronze-finished aluminium cladding. This clearly differentiates the new from the old in a non-pastiche manner, with the metal cladding also providing a nod to the industrial heritage of metal fabrication within the immediate site and wider city of Sheffield.

Rather than demolish a piece of Sheffield’s industrial heritage, the vision for Albert Works was to celebrate its history and sensitively breathe new life into the local area. This is actively achieved through events that are often hosted in the space, bringing economic vibrancy into this once redundant part of Sheffield’s City Centre. The building was named Workplace of the Year at the 2018 AJ Architecture Awards and has won national RIBA and BCO Awards.