New York studio Levenbetts and Mexico City practice PPAA are among the firms that have designed sustainable and socially conscious architecture prototypes for an exhibition on housing at Crystal Bridges Museum of American Art in Arkansas.

Architecture at Home is an exhibition that brings together experimental housing by five architecture firms based across the Americas.

The prototypes respond to issues central to the state of today’s housing in both the USA and around the world by acknowledging the present needs of occupants and their natural surroundings, as well as reflecting on the past.

Curated by Dylan Turk, the show takes place outside along the meandering Orchard Trail at Crystal Bridges Museum of American Art in Bentonville, Arkansas.

The designs are positioned alongside a 50-foot prototype of the 1965 Fly’s Eye Dome by the late American architect and theorist Richard Buckminster Fuller – a prototype that encompassed his idea for the ultimate affordable, portable and self-sufficient home.

One of the five prototypes is House of Trees: City of Trees by Levenbetts, a structure made from Arkansas southern yellow pine that is composed of two pavilions connected by walkways, which are housed under fanned slats of wood.

Built from mass timber, the prototype was designed to offer a low-cost and sustainable solution to housing with a form that complements the contours of its surrounding landscape, according to Levenbetts.

Another prototype that aims to connect inside and outside spaces was created by PPAA, which includes natural soil flooring.

Formed from translucent geometric panels, the house is designed to stand alone as a single structure or can be scaled to achieve a series of linked houses that would encourage community-based co-living.

“The concepts presented here offer hope for the future,” said the museum.

“Each structure demonstrates how thoughtful design can inspire more sustainable and human-centred models of building and living.” 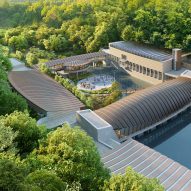 Totem House: Histories of Negation is an experimental sculpture by Studio Sumo that aims to discuss the often-suppressed histories of Black and Indigenous peoples in northwest Arkansas through architectural symbols.

Designed as a series of totemic structures, each totem is engraved with information citing events that detail the forced migration or expulsion of these communities over many years in Arkansas and elsewhere.

The structures take the form of an outline of a house from a distance. But up close, the shape is meant to disappear – drawing attention to the injustice and displacement endured by local communities.

Totem House can also be expanded into a functioning structure that can be prefabricated off-site, according to its architects.

“Each firm recognises the complexities and barriers that exist in the current housing system, from financing and established building practices to neglected histories of place,” added Crystal Bridges.

Studio: Indigenous founder Chris Cornelius offered a prototype that aims to explore how conventional housing models could be improved for Indigenous peoples.

Cornelius designed an experimental structure with a towering steel hearth, which he described as an important place to gather inside the home.

Compartmentalised rooms also offer internal flexibility – a hallmark of many Indigenous homes, according to Cornelius.

Made up of rigid columns, these building blocks represent stumbling blocks that many people experience when trying to secure their own house.

Large sections of each room in the prototype home were omitted from the design, aiming to expose the many issues within the housing industry that are not often enough acknowledged, according to Mutuo.

“My goal is to prove that affordability, beauty, and diversity in housing types can coexist when designing, regulating and developing housing,” said Turk.

Other projects that explore experimental housing concepts include a community in Mexico with homes by Frida Escobedo and Tatiana Bilbao, a pair of hill-like buildings in France by MVRDV designed for “a variety of income levels” and Hackney New Primary School and 33 Kingsland Road – Henley Halebrown’s affordable housing project in London.

The photography is by Ironside Photography.

Architecture at Home takes place from 9 July to 7 November 2022. See Dezeen Events Guide for an up-to-date list of architecture and design events taking place around the world.