The flagship store is situated at 432 Jackson Street in the historic Yeon Building, which dates back to 1855, in the heart of the city’s luxury shopping district.

Its interior is the latest collaboration between Thom Browne‘s eponymous founder and architect Flavio Albanese of Italy-based ASA Studio Albanese, who has designed over a dozen stores for the brand since 2017.

Like its counterparts around the world, the 1,250-square-foot (116-square-metre) space is outfitted to look like a Mad Men-era workplace.

This is achieved by pairing highly decorative marble surfaces with strips of white slatted blinds and tube lighting.

Among the furniture pieces curated to embellish the theme are a glass-topped desk placed in the centre of the room at one end and chairs that form a small seating area at the other.

“Thom continues to outfit this space with mid-century furniture by American and French designers — including seating and lamps by Jacques Adnet, a desk by TH Robsjohn-Gibbings, office chairs by Knoll, benches by McCobb, coffee tables by Mathieu Mategot, and display etagere’s by Maison Jansen,” the team said.

The largely desaturated colour palette – reflective of the brand’s clothing – is interrupted by brass accessories and details on the furniture, as well as a few camel-toned garments.

A black band wraps around the rooms at floor level, separating the grey marble on the walls from the lighter toned stone underfoot. 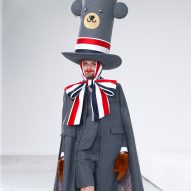 Clothes are presented on metal rails mounted on wheels, while bags, shoes, eyewear and fragrances are displayed on minimalist freestanding shelves.

The fitting rooms are hidden behind doors covered in the same material as the walls so that they blend in seamlessly when closed.

Thom Browne founded his label in 2001 with five suits in a small by-appointment shop in New York City’s West Village, and eventually expanded to include ready-to-wear and accessories lines for both men and women.

Browne’s Autumn Winter 2022 collection was an ode to toys and featured sculptural tailoring, presented at New York Fashion Week in front of an audience of 500 teddy bears.

The photography is courtesy of Thom Browne.