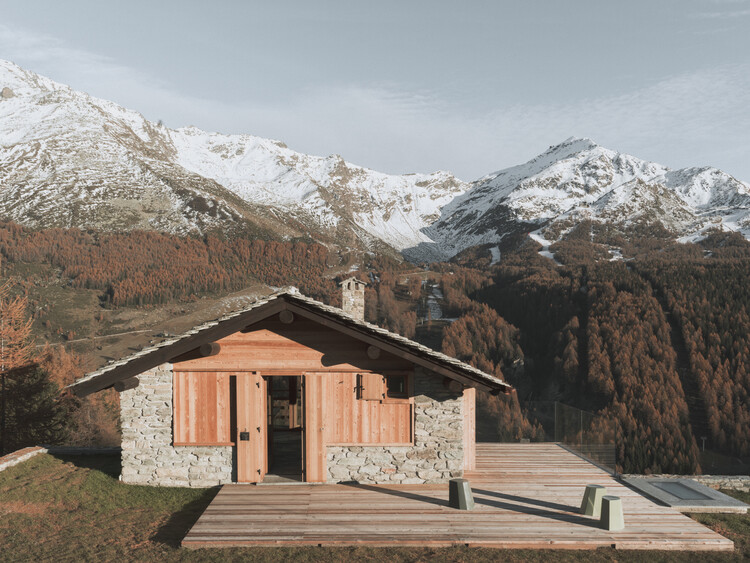 Text description provided by the architects. Alpine architecture is able to accommodate different materials or architectural languages, despite what is used to believe, but at the same time, the mountain is merciless and always requires the utmost attention to quality because it does not forgive improvised solutions that do not respond effectively to its strength. The project consists of the extension and internal completion of an existing hut, the shell of which had already been renovated previously by another owner.

The external architectural changes are solved in the replacement of the fixed wooden cladding with a system of opening doors that reveal, for the periods of use only, new large windows on the mezzanine floor from which you can enjoy suggestive views of the surrounding landscape. It is as if the building took on two guises, one more traditional and mimetic during periods of inactivity, the other more suited to contemporary residential use – distinct from the objectives for which it was born – and therefore light, iridescent and transparent.

At the base of the building, on the south and north fronts, there are two modest extensions which, due to their position and architectural features, allow the identification of the main building to be preserved. The project is conceived on the ambivalence of the two levels: the upper one for the living area is an open space open to the landscape and the new wooden terrace that covers the annex on the sunny front; the lower level, used as the sleeping area, instead provides more intimate spaces and measured openings.