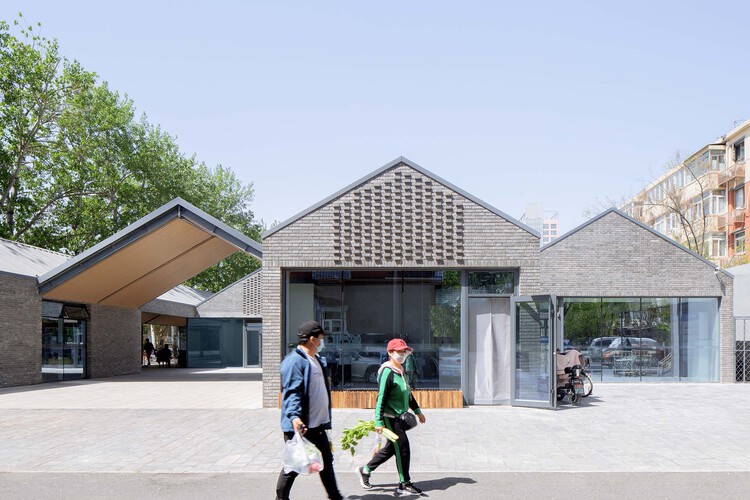 Text description provided by the architects. XingHuaDongLi Zuolinyoushe Neighboring Courtyard Market is a new handy service facility for the old XingHuaDongLi Community located in Daxing District, Beijing. XingHuaDongLi Community was built in the 1980s as staff dormitories for the Beijing Chemical Fiber Factory. Like other residential areas constructed in the old days, many of the fundamental facilities aged day by day, making lives inconvenient for the neighbors in the communities. Based on the realistic conditions, the government of Daxing District took the opportunity of organic renewal of old communities and built this handy service facility from the view of serving and benefiting residents, strengthening weaknesses surrounding “Seven Properties” &” Five Senses ”. As for functional configurations, fruit and vegetable stores, laundry, drugstores, and restaurants were set up considering the high percentage of old people in the community. The facilities will be further improved and adjusted to the needs of neighboring residents, making it a new service center for an old community for real.

The new community market is situated in the center of the entire XingHuaDongLi Community, the south of which lies a god-given community center park, where neighbors relax, gym, and socialize on ordinary days. The other parts of the site are typical slab-type apartment houses in the 70s to 80s of last century, the strong line space shape of which defines the pattern space pattern of the entire community. To build a new handy facility serving its inhabitants in the center of such an old community, the main consideration lies in how to re-construct the relationship between the building and the community. We hope that the new market acts as the real center of the community, linking every aspect of residents’ lives, rather than merely a house located on the site. It should be a space field embracing the participation of the residents, where everyone socializes in daily life, in addition to benefits on basic lives.

On the basis of such considerations, we treat the market as one environment in design strategy. Apart from itself, the building provides more outdoor, half-outdoor, and indoor environments for the occurrence of community life Scenarios. For the interaction of building space, we want to insert the new building in adjustment with the whole community space by proper changes to bring new possibilities to the community environment and life, rather than interrupting the original community space levels. Based on the in-depth research on traditional market space and studies of site possibilities, we further planned the functional requests of the program and classified the daily functions of the community. Different space levels were applied to different functions, which created possibilities for the variation of space in the market. For the rectangle spaces that originated from the basic market space, we matched them with corresponding functions, integrating these space volumes into the site with linear space, which is similar to the nature of the community space. Different basic market space volumes interacted with each other to form open and half-open courtyards in different sites, which helps the market to integrate into the old community through a soft interface and provides more interaction space for the residents. The insertion of courtyards of different sizes not only introduces the traditional Beijing concept of “Yuan” into the market but also brings new possibilities to the basic market space. The market is no longer dark and noisy thanks to the high general space introduced by “Yuan”, which makes it a more comfortable environment with bright sunshine and beautiful sceneries in the courtyard.

The roof is also an important consideration in the design of the market. In the traditional market space, the roof is the existence that covers the gorgeous lives beneath in a superior and general gesture. In the market design of XingHuaDongLi， considering its influence on the northern departments and the sizes of site borders and neighboring communities, the roof is not supposed to be expressed as a large, entire space shape. Based on the response to the rectangle market space in different volumes in the layout, a consecutive ridged roof covering the whole market space was employed to form a rise-and-fall shape. This treatment guaranteed the consecutive generality of market space on one hand and created a harmonic relationship between the market and the community on a convenient scale. As a result, the consecutive roof and the crossing courtyard set up an extraordinary market space background, where varieties of community lives take place day after day.

At the construction level, the building is a program of rapid start-up and coming into use. As designers, on one hand, we hope that the logic of the building space and structure conform to the fast construction and formal representation, while on the other hand, we hope that the building shows some sort of humanistic qualities. Iron, as the best choice for fast construction, is chosen as the basic construction type of the market. We tried to classify different scales of space into the standard iron structure model system to increase the standard ratio of construction components. Under the basic structure system, we hope that the market can show clear logic in the construction scale—structures, maintenance, and decorations are all guaranteed their existence and expression, respectively. Grey brick walls responding to traditional Beijing cultures were used as maintenance structures of the building, which express different looks on different interfaces of the building in different masonry ways. The iron supporting system is sufficiently expressed inside the building, which shows a clear relationship of loads between different parts. In addition to the humanity expressed by the courtyard, the roof, and the grey walls, the vivid breath of life for the market building itself is also greatly emphasized in the design. Under the big roof, the warm wooden ceiling of the market mainly consists of two parts, one is the wooden ceiling used to create atmosphere and divide space, and the other is the metallic lath ceiling used to accommodate electronic devices. The wooden ceilings act as fillers of the aspects between building structures without covering the original framework of the building. The metallic lath ceiling classifies the electronic devices and transmits their expression in the building at the same time, which shows the hustle and bustle in the sophisticated life in the new market building.

As a common type of building in the reconstruction of cities in recent decades, market buildings that carry on various lives of citizens have attracted plenty of social attention, leading to numbers of exquisite “celebrity” market buildings. However, what makes the market lastingly vibrant is the overall running system and on-site content behind the excellent designs. The markets need to genuinely integrate into the on-site lives, getting close to daily life and achieving constructive balance with the operators. In the practice of XingHuaDongLi Zuolinyoushe Neighboring Courtyard Market, numerous coordination and game between the government, social capitals, and community citizens were involved in the operating level of the program. Designers participated in the whole process and balanced the appeals of participants in the way of architecture, and the final output is a carrier of space that carries the expectation of everyone and links the community with daily life. With the integration of life content, the market is going to show richness continually. We hope that the built environment with joint efforts integrated by designers presents a more vitalized appearance and becomes a beautiful scenery in the center of the old community.