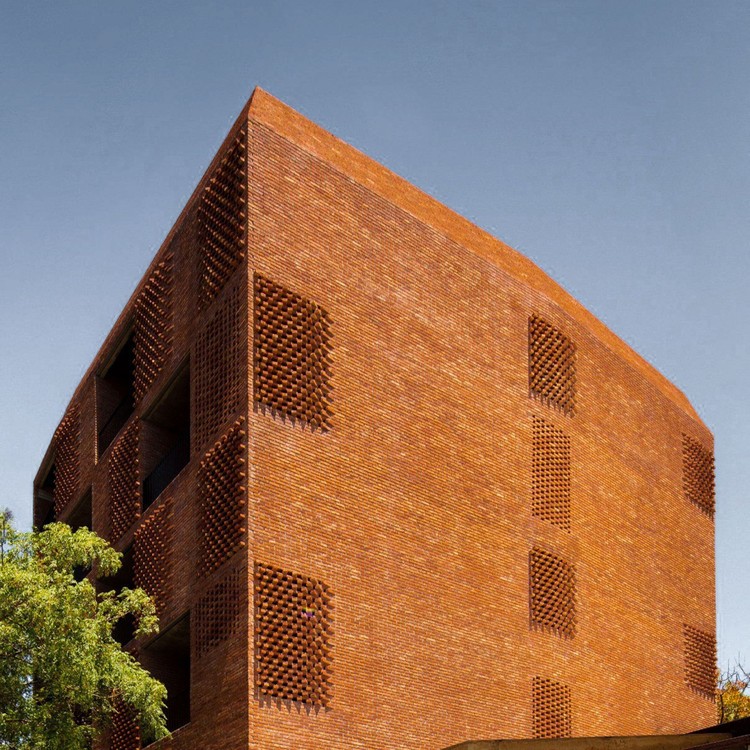 Text description provided by the architects. The 20-unit multifamily housing program is developed in a central lot located on one of the streets parallel to the North-South axis of the city of Campana, low-density urbanization located NE of Buenos Aires on the banks of the Paraná River. The lot opens its front to a sports field that allows open views to and from the avenue.

The building is organized on an extended base throughout the land, which connects the center of the block and the street, and the main body, with five levels, rises above the front portion of the plot. The base organizes a gradient of intermediate spaces (thresholds, ramps, halls, and expansions for common use) that control the continuity between the public space and the interior of the building.

The main body, which concentrates the dwellings and the vertical circulations, is defined as an exempt volume based on perimeter retreats that variably organize its relationship with the context. Towards the street, a landscaped retreat preserves the existing pine and attenuates the building´s impact at a pedestrian scale. On the backside, a large square patio recreates the conditions of urban space and allows preserving an old avocado tree. Finally, on the sides, minimal recedings make it possible to naturally illuminate and ventilate the building’s common circulations.

The building materializes a model of urban densification that, from a contemporary position, integrates and equalizes the demands of a growing medium-sized city with the traditions and social inertia of its inhabitants, the potential users of the building. Through the proposal of terraced patios the building recovers and updates, for the typology of high-rise housing, the forms of living typical of provincial cities, where the enjoyment of the exterior and the interaction between neighbors are characteristic.

The building is structured on a double bay of apartments with terraced patios, which take advantage of the sun from the East and West and the views of the avenue and the center of the block. The alternating repetition of apartments and terraced patios organizes, on the facades, a three-dimensional checkerboard pattern, recognizable on an urban scale. This texture, of masses and habitable spaces, gives thickness and porosity to the envelope, allowing the activation of the building’s margins through the use of the dwellings´ expansions and their interaction with the urban space.

The envelope is resolved entirely in brick, a material widely and extensively diffused in the culture of the region that constitutes a technically reliable, economically affordable, and environmentally sustainable solution. This technology allows the development of a continuous gradient of configurations and surface performances, ranging from the simple enclosure wall to masonry with openwork and variable relief in the form of brise soleils. In this way, the different thermal, lighting, and visual requirements of the program are integrated within a highly efficient and formally continuous building envelope.