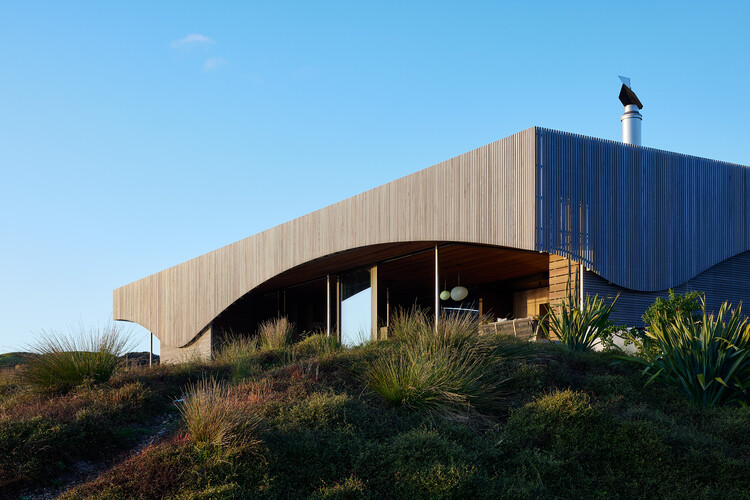 Text description provided by the architects. The site is a large dunescape, carpeted with Muehlenbeckia, which undulates and rolls SW to NE down to a long East Coast beach. Planning restrictions stipulated a 200m setback from the high-water mark. The brief called for a main house with 2 bedrooms and two smaller sleepout structures.

The qualities of the site are singular: softly undulating land and a very strong uninterrupted horizon line drawn by the ocean against the sky.

Our concept emerges from these two singularities, a simple rectilinear form is sheathed in a light rainscreen of timber battens, the top edge of the rainscreen is sharply cut to introduce a strong horizontal line reflecting the horizon and delineating the built form. The underside of the rainscreen is cut to soft curves which conceptually mirror the surrounding dunes and soften the form in the landscape. The rainscreen describes a platform onto which the house functions are arranged.

In terms of siting; the buildable area along the 200m setback line was in a depression in the dunes, the view of the ocean however was established to be best at the highest that the planning rules would allow. In order to keep as close to the beach as possible, and to maximise the potential view but avoid a double storey structure in the landscape, we constructed the building on stilts then re-contoured the land around to building the bring the dunes to the new floor level.

The three buildings on the site are linked with boardwalks which float above the Muehlenbeckia and retain the integrity of the dunescape.