How to add a modern 3D paneled fireplace to a blank wall!

This is such a FUN project! If you’re looking to add a fireplace or focal point in a room, but your style is more modern — this is for you! This awesome DIY 3D panel fireplace wall was such a cool addition to our son’s game room.

This modern accent can be added to any wall or ceiling, with our without the electric fireplace! It would also look SO cool as an accent wall around a TV, or just by itself. 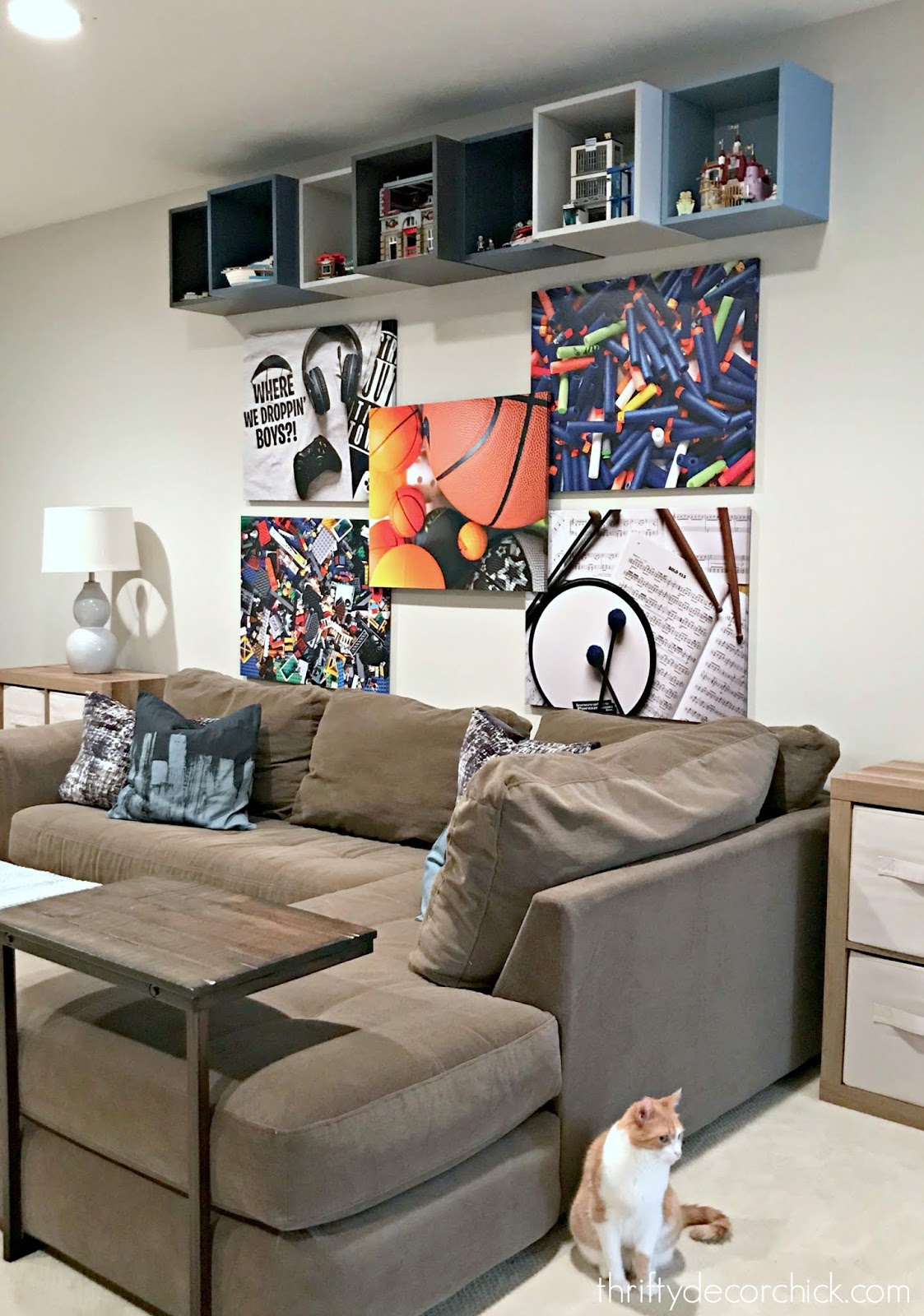 Last year he started asking to change that space into more of a modern game room…a little more fitting for him. I obliged and we’ve slowly but surely been transforming it.

When I added the DIY electric fireplace wall in our basement last year, our son loved it so much we got him a smaller wall mounted version for his game room last Christmas. I hung it back in January, but we hadn’t touched that wall since.

We had a plan in mind…and now that the Depp trial is over I’m finally tackling projects again. 😂 We finished up the fireplace wall the other day and are TICKLED with how cool it looks.

Here’s the process I used to create this modern 3D fireplace wall!

First up, these 3D plastic panels were another gift to him last holiday season — I know his taste well enough that I figured we could do something cool with them. After talking out the design, we decided to use them around this electric fireplace.

I showed him an inspiration photo from the reviews of these panels and he was sold! This electric fireplace is wall mounted, unlike our other one that was inserted into the wall. I wanted to build a faux wall behind it, but it couldn’t be so thick that it blocked the vents or heat source on the top.

I bought some cheap 1×2’s to create a “frame” on the wall — I’ll get into the measurements in a bit. (Those were the hardest part!): 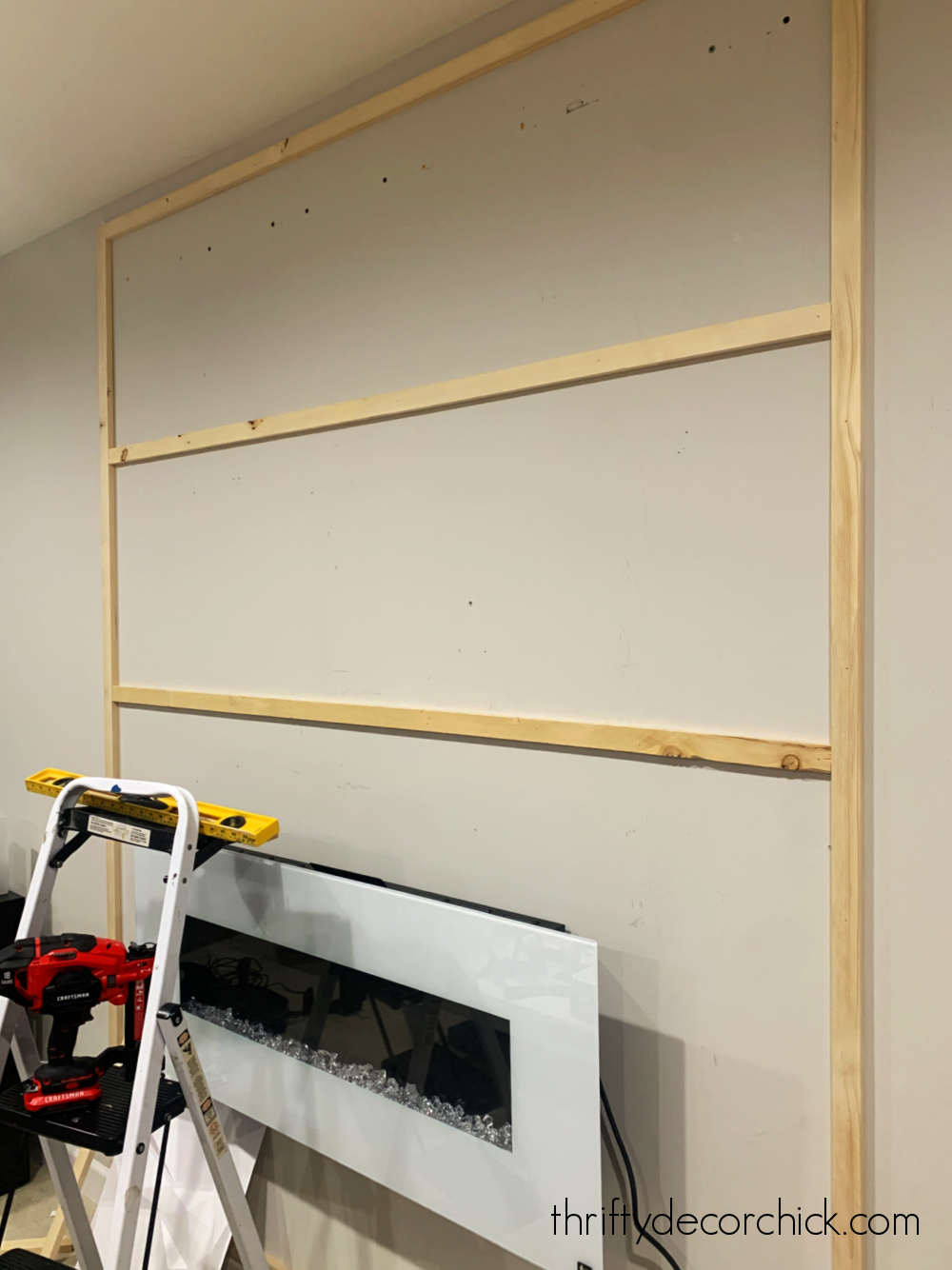 I also grabbed some 2’x4′ OSB panels from Home Depot. If you plan out the 1×2 frame just right, this part isn’t necessary. But the backing makes it much easier to install the 3D panels: 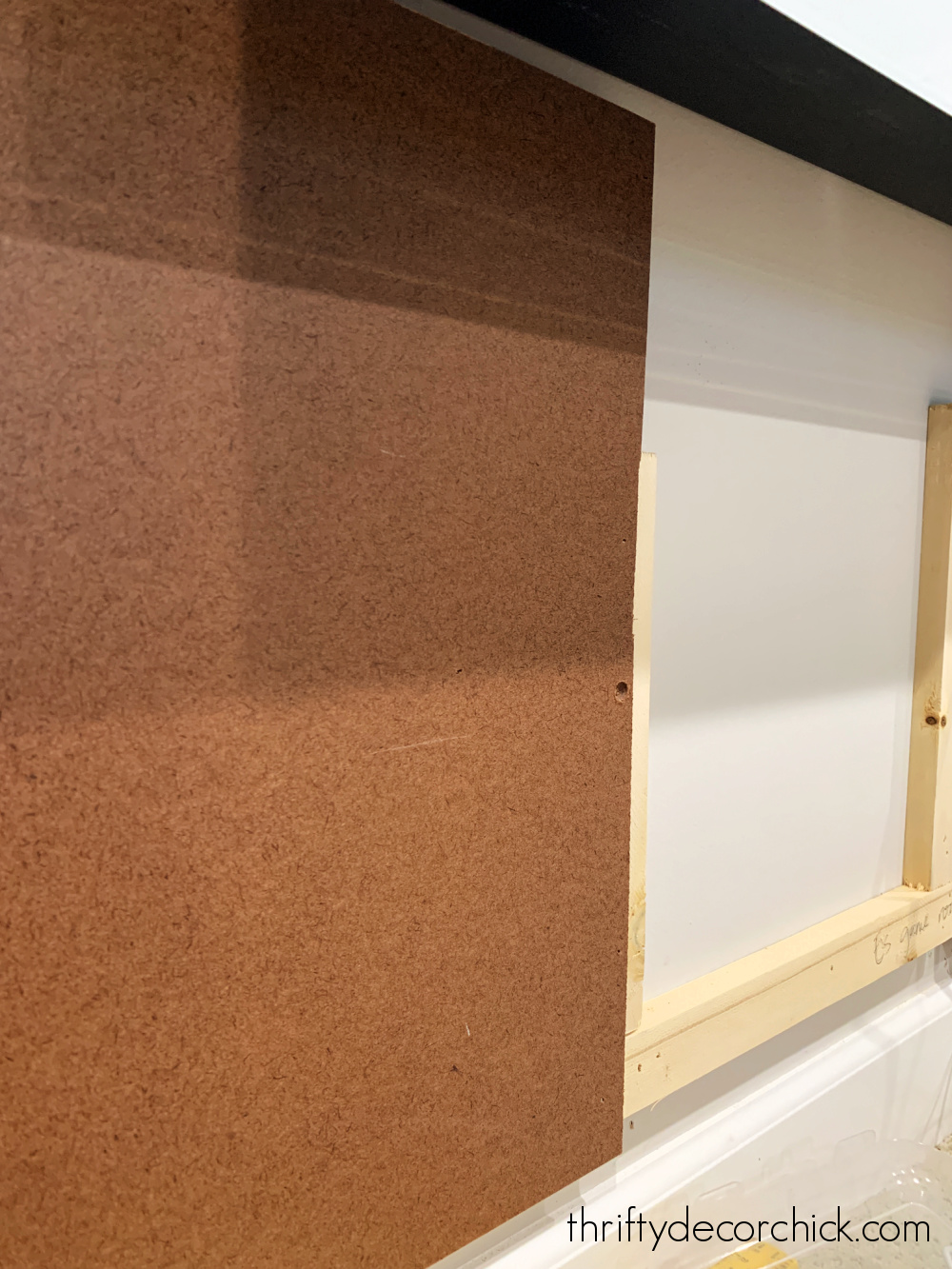 Plus, we were adding LED lighting behind the edges of the wall, so I didn’t want those shining through between the plastic panels. That will make more sense in a minute!

I used a combo of a nail gun and screws to install the OSB to the frame. I used countersink drill bits before screwing in to ensure the screws were flush: 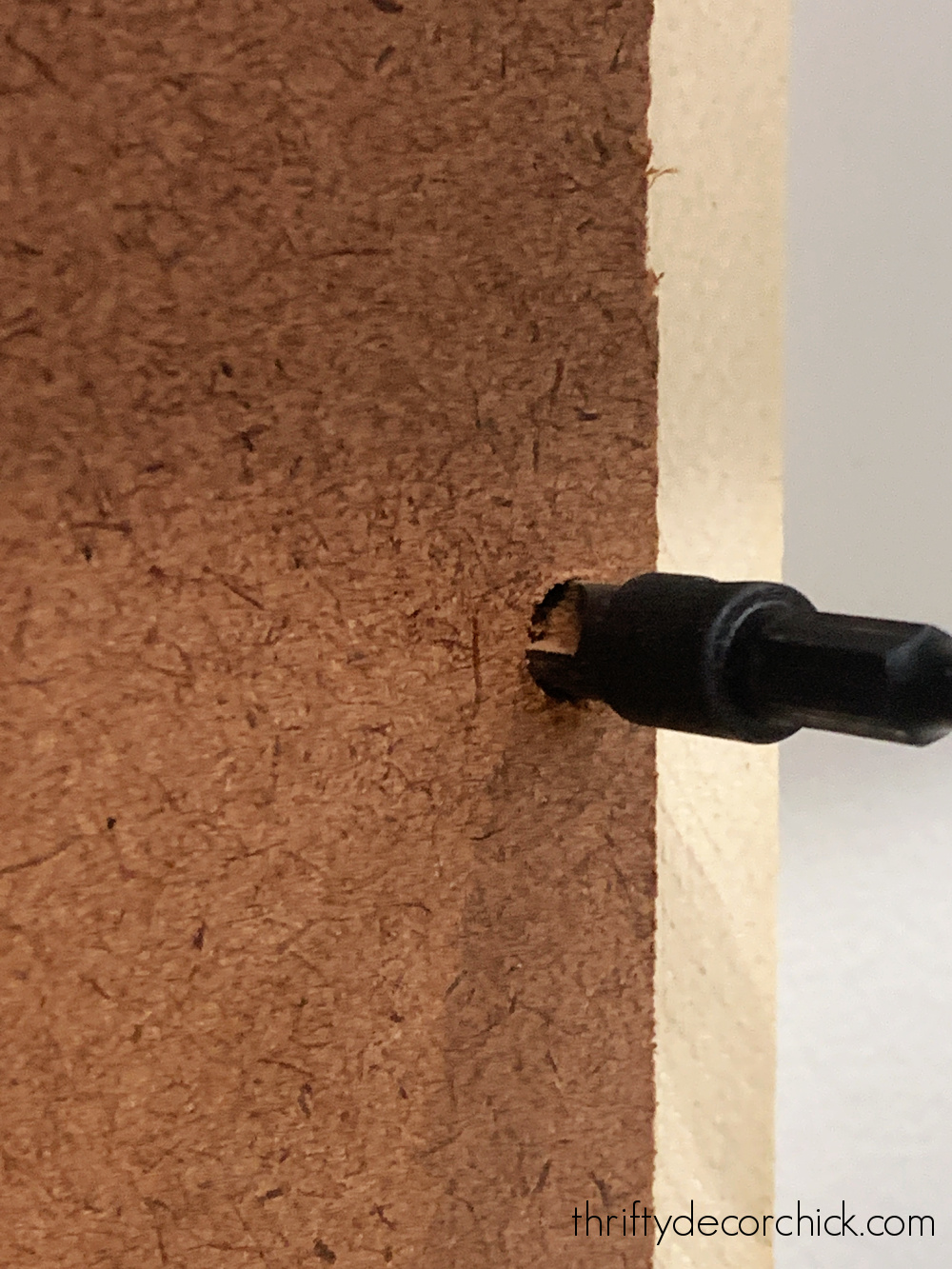 Once the frame was covered with the OSB, it was time to install the plastic panels! These are SO cool and I’m already trying to figure out where else I can add them. They have a TON of different designs available.

Each wall panel is super lightweight, but the plastic does not allow for nails or a nail gun. So I used a recommendation from the reviews to hang them — this thick Gorilla double sided tape did the trick: 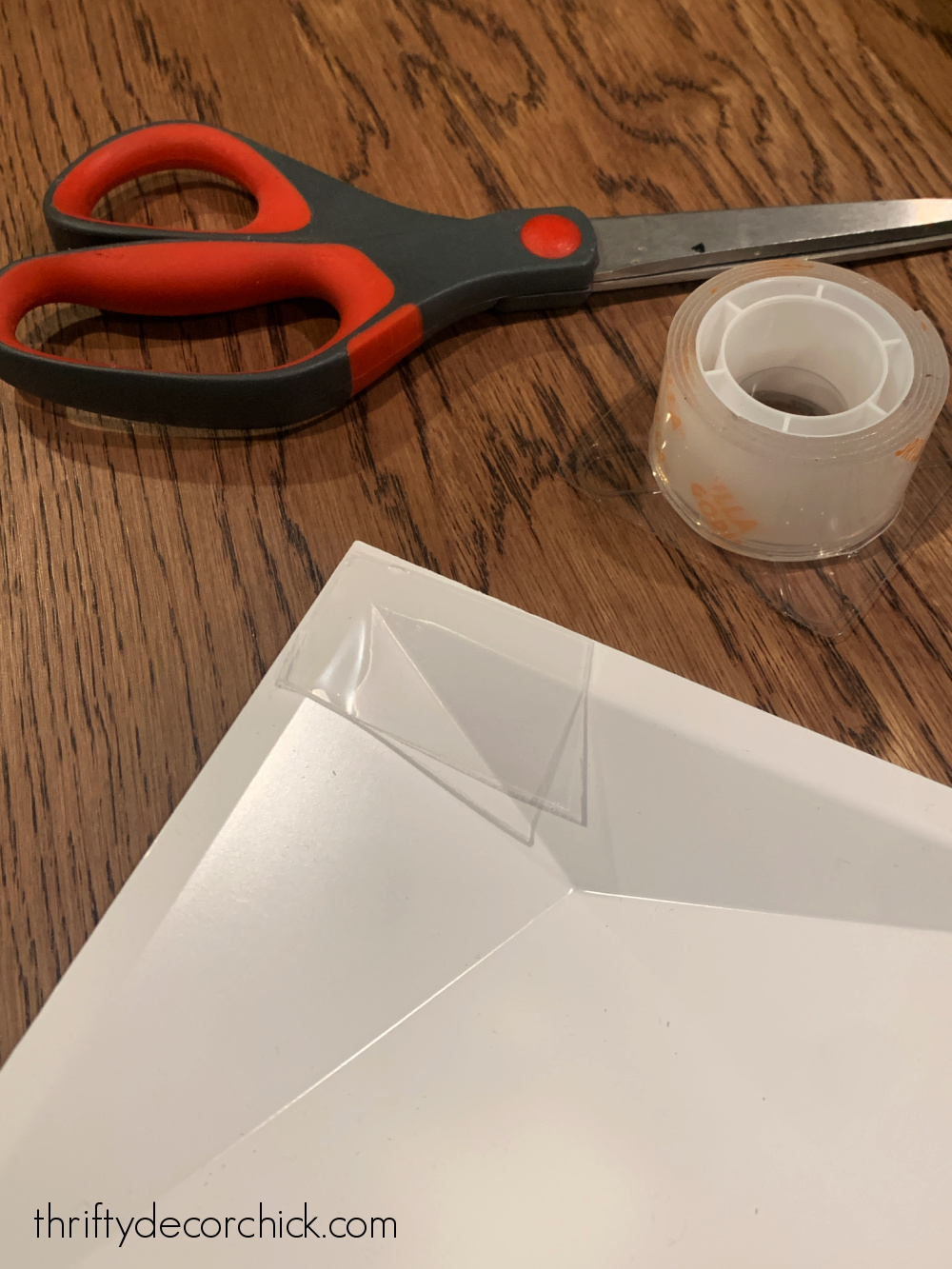 I used waaaay too much tape on the first one, and then quickly realized I hardly had to use any for these to stick to the wall. I only added small strips to each corner and side.

You can see above that there’s not much surface space to attach the tape, but it worked great.

These 3D panels are VERY lightweight!

So the measurements…if you aren’t adding lighting behind your faux wall, or you’re just placing them right on the wall, it will be easy!

Because we were attaching strip lights around the back, I knew I wanted the backing behind the 3D panels to go past the 1×2 frame a bit. I decided on a size about an inch wider and taller than the size of the frame on the wall. The half inch overhang on each side was the perfect amount of space to stick the LED lights to the back around the edges.

My measurements weren’t perfect, so I had a bit of the OSB showing on one side. I could’ve painted it white and we wouldn’t have noticed it, but I wanted to make it look a little more finished: 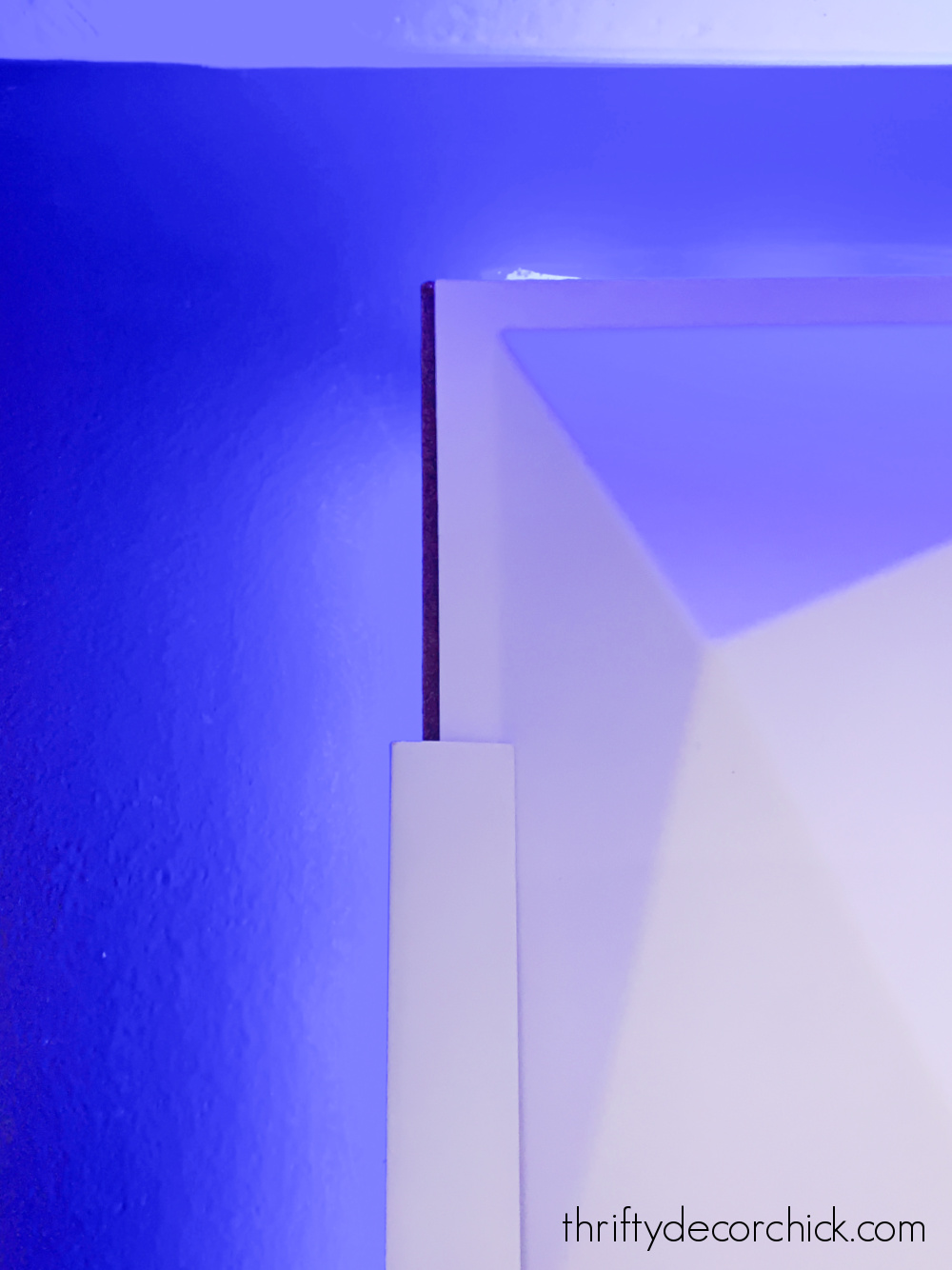 You can see that OSB peeking out there on the side — I found these plastic trim pieces that slid right over the OSB and the edge of the panels to cover that on both sides: 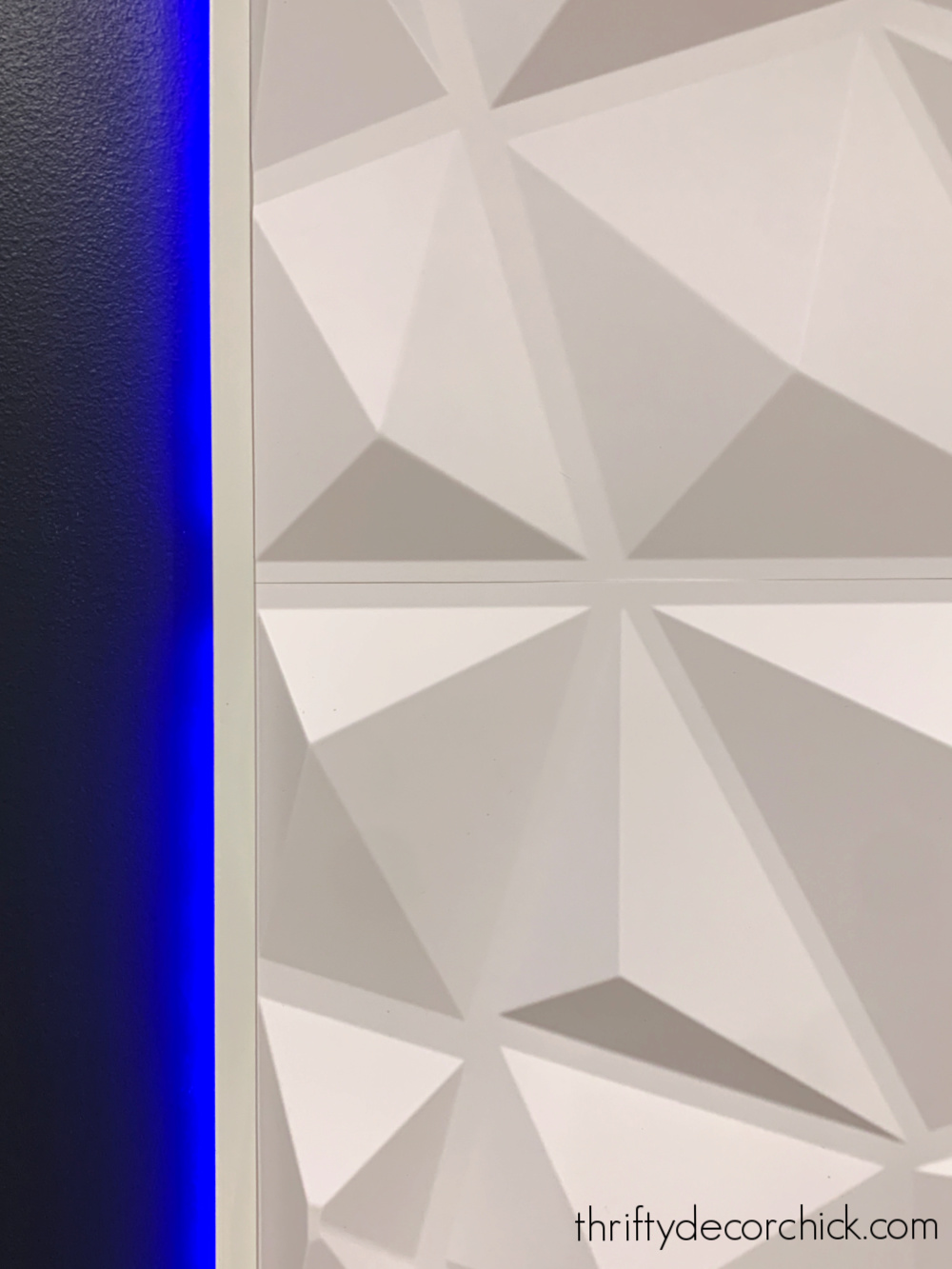 I found these plastic pieces at the end of the trim aisle at Lowe’s. There were a few options available. I used small pieces of the mounting tape to secure any loose spots.

It matched the 3D panels perfectly, so there was no need to paint! Those were only $3 each and I only added them to each side, not the top and bottom.

After all the decorative panels were installed, I had an awkward space right above the fireplace that needed to be filled in. I could have cut the panels down to fit, but they don’t cut especially clean.

Instead I had a scrap piece of trim that fit perfectly: 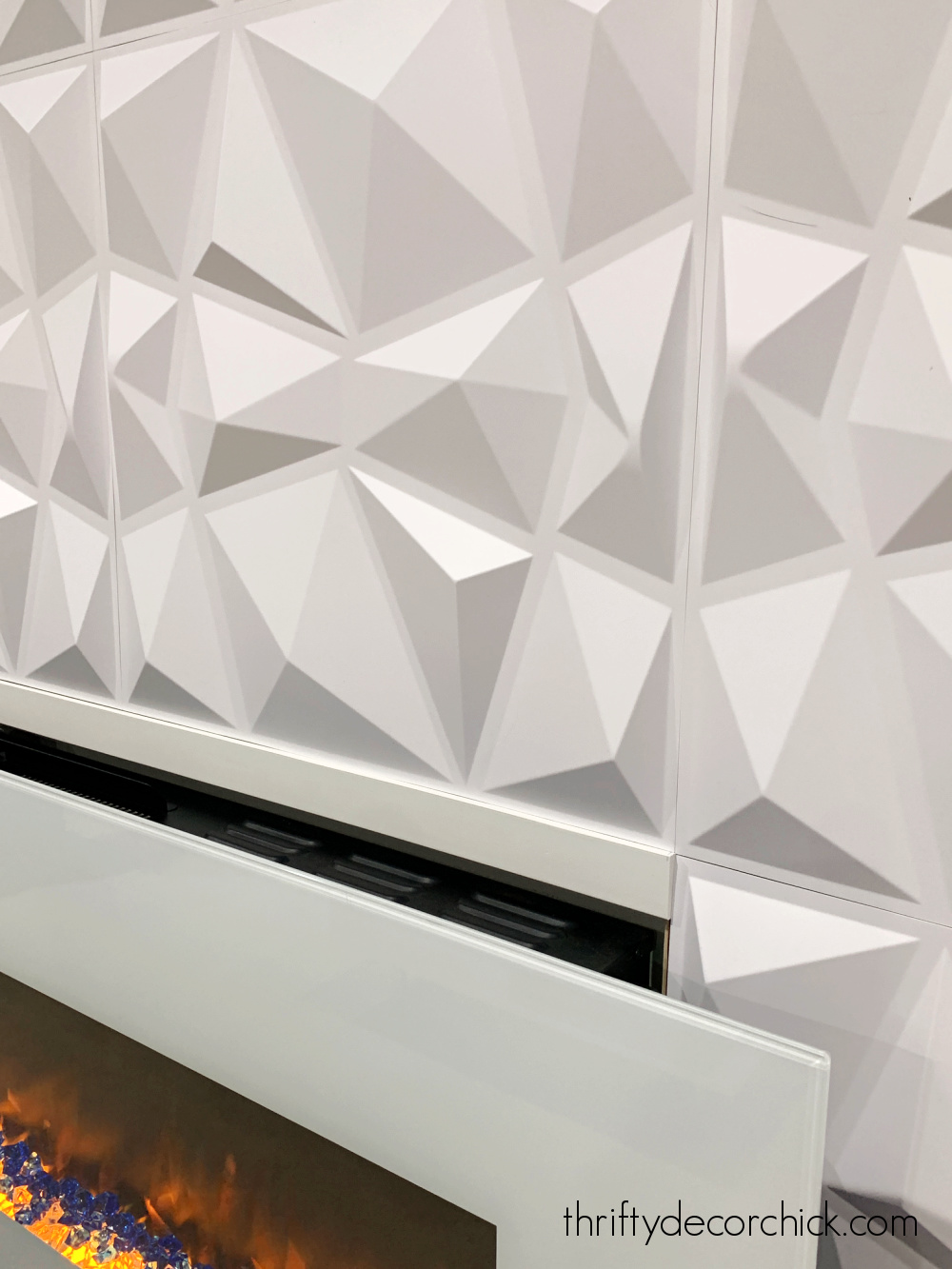 I forgot to paint the OSB backing white before starting to stick the panels on…I was a little too excited. As I hung them, we noticed that very slight dark line between them: 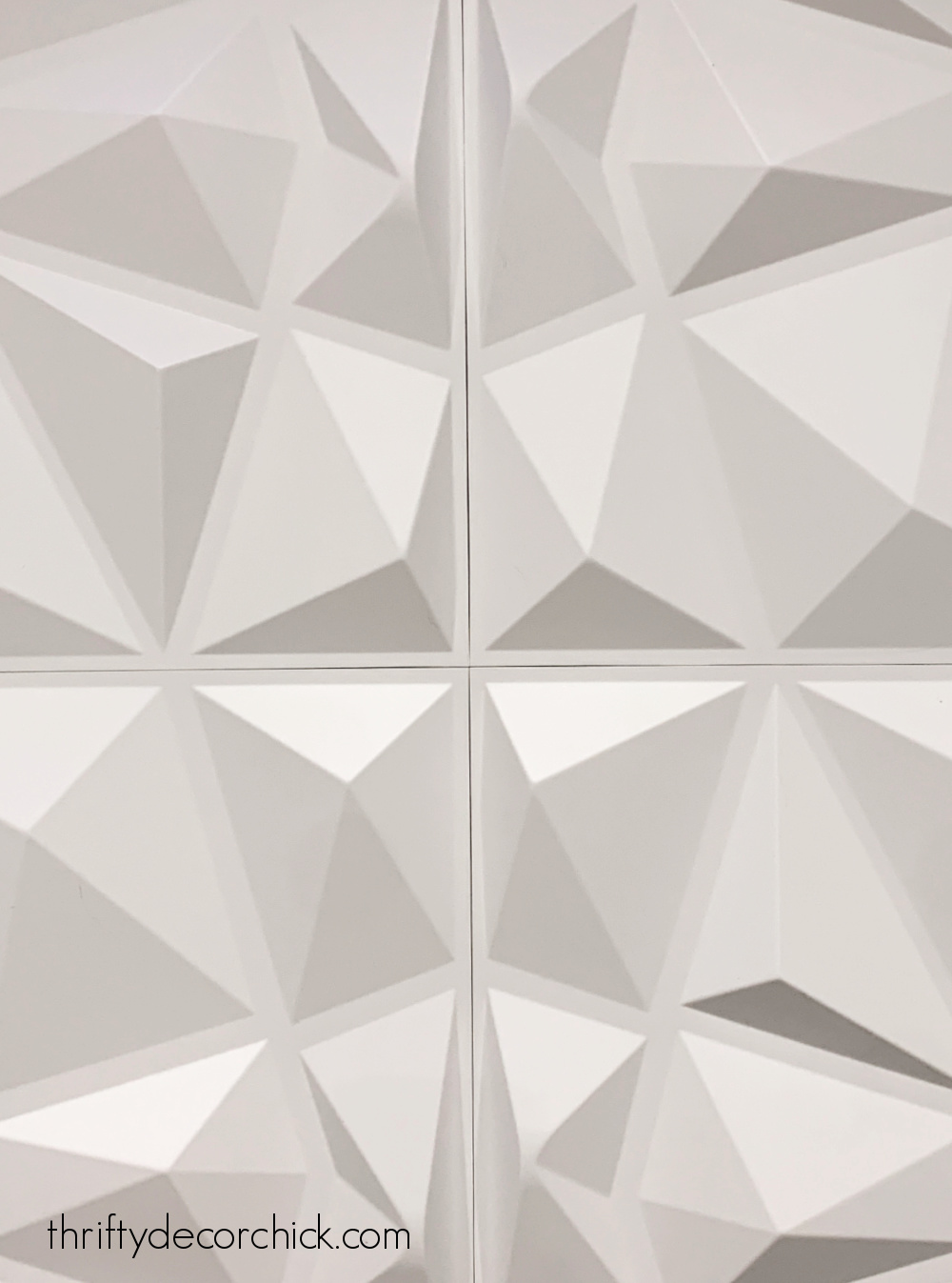 My plan was to add a thin line of white caulk between each one, but by the time it was done we realized there was no need. It didn’t bother us at all.

I knew this bright white modern wall would look great against a deep color, so we used some leftover Cyberspace from our family and dining room for the rest of the wall: 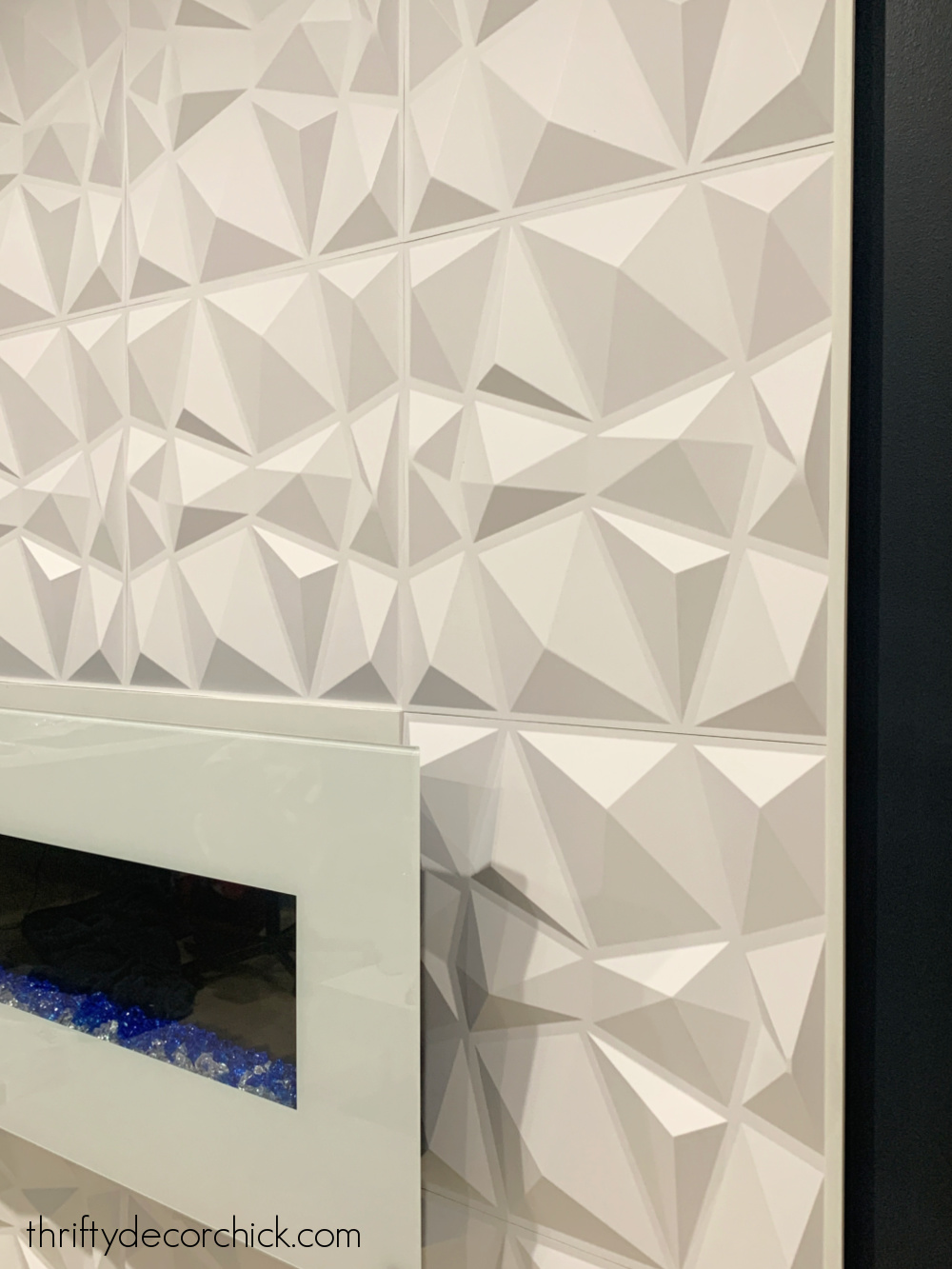 The contrast is SO good!!

We kept calling my husband in every few minutes to look at the progress after each line of panels was hung. 😉 What a fun project!: 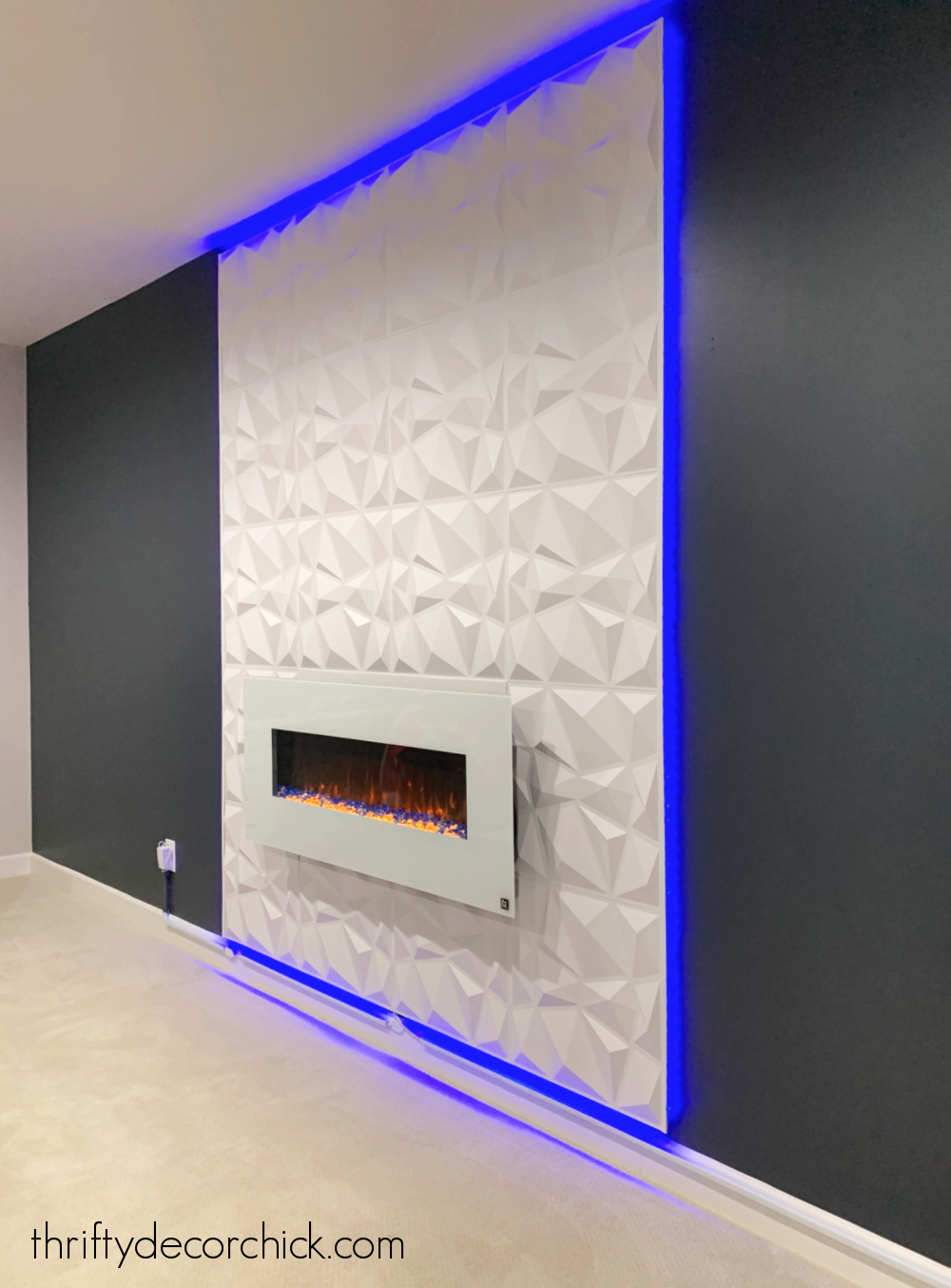 Of course, the best part for any teenage boy (OK…and his Mom) is the cool lighting: 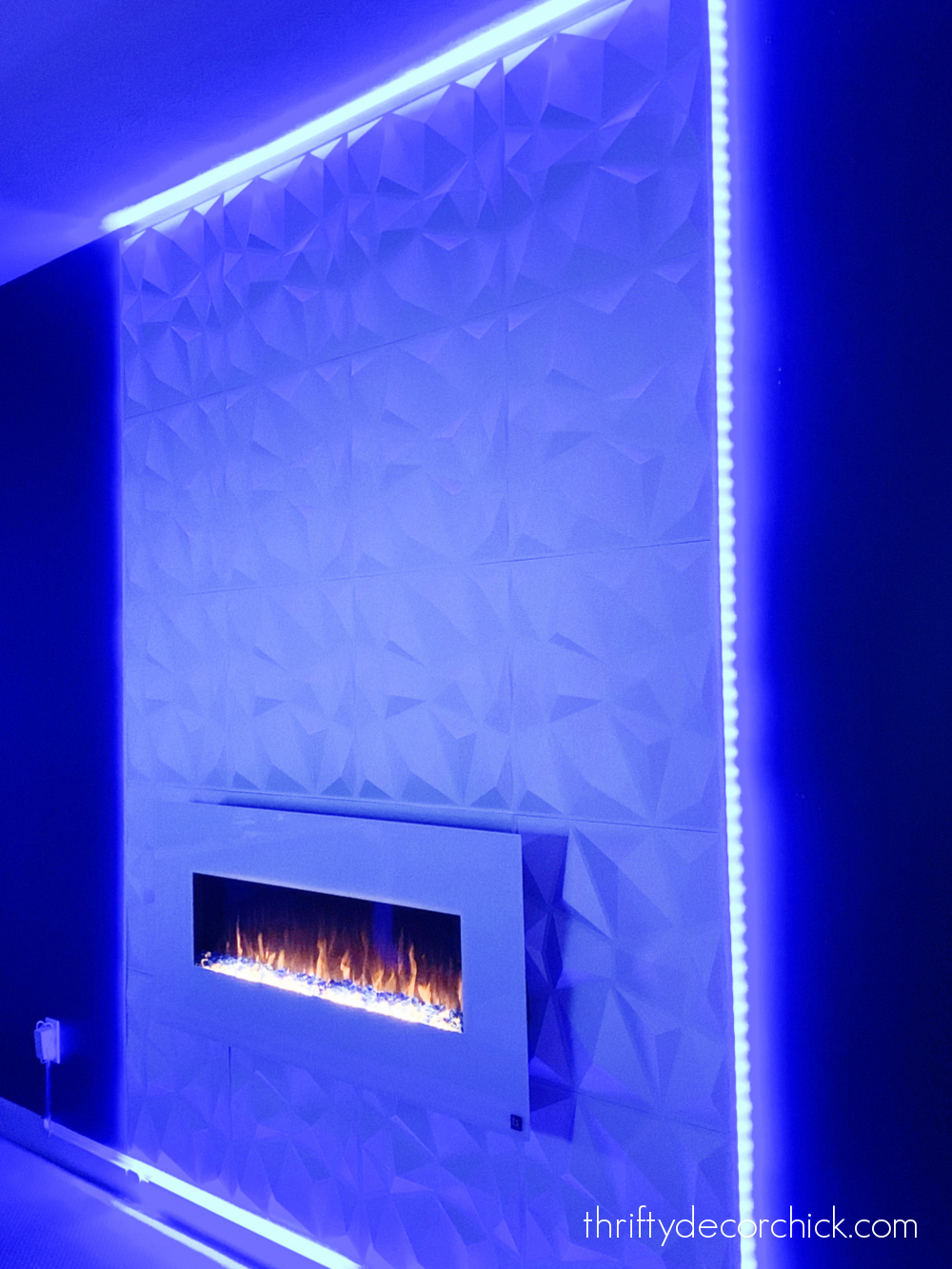 These LED light strips can be operated by a remote or via the app. We have these all over our house — I’ll write about them sometime soon! 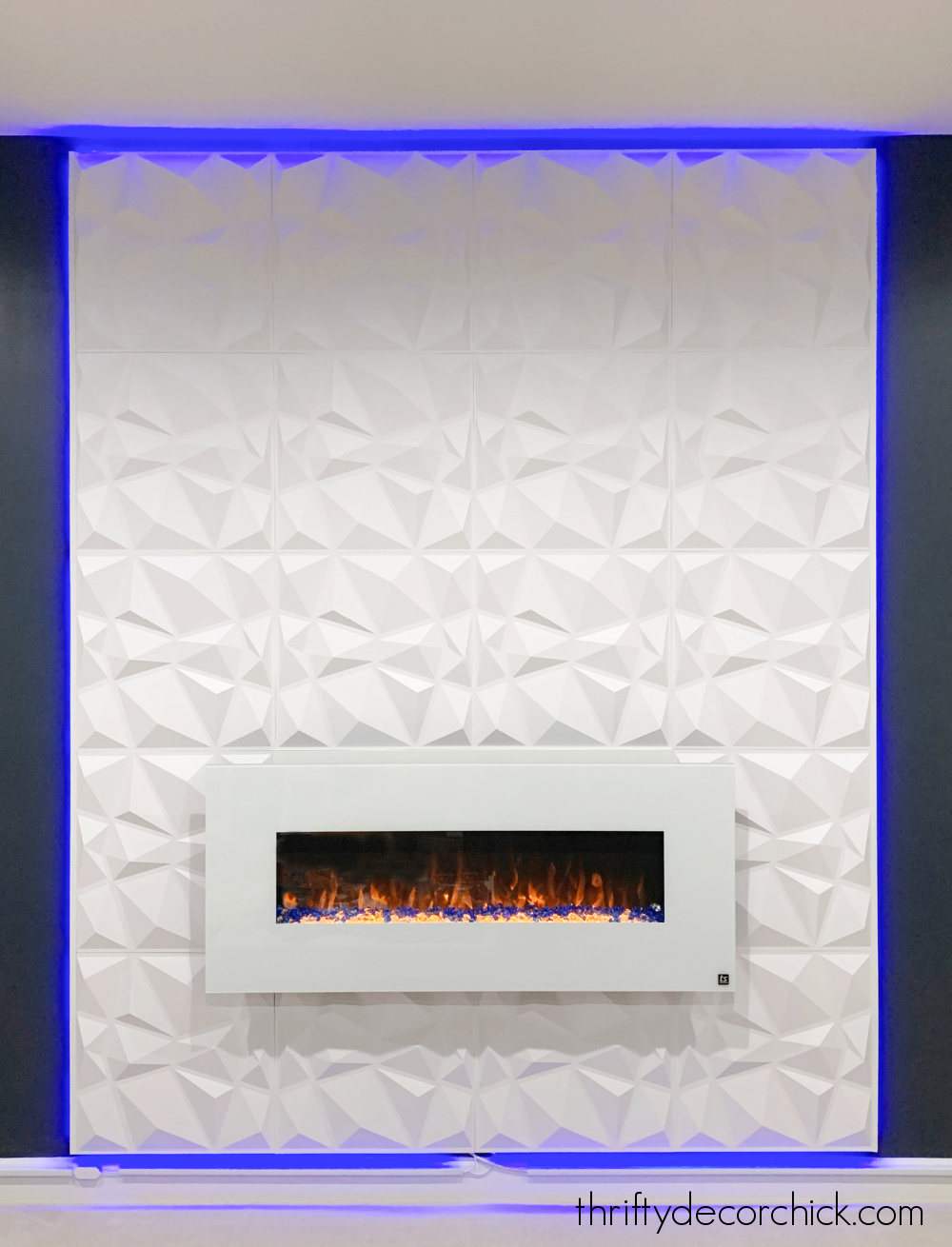 We have more to add to this wall, but the cool vibe has gone up quite a bit already!: 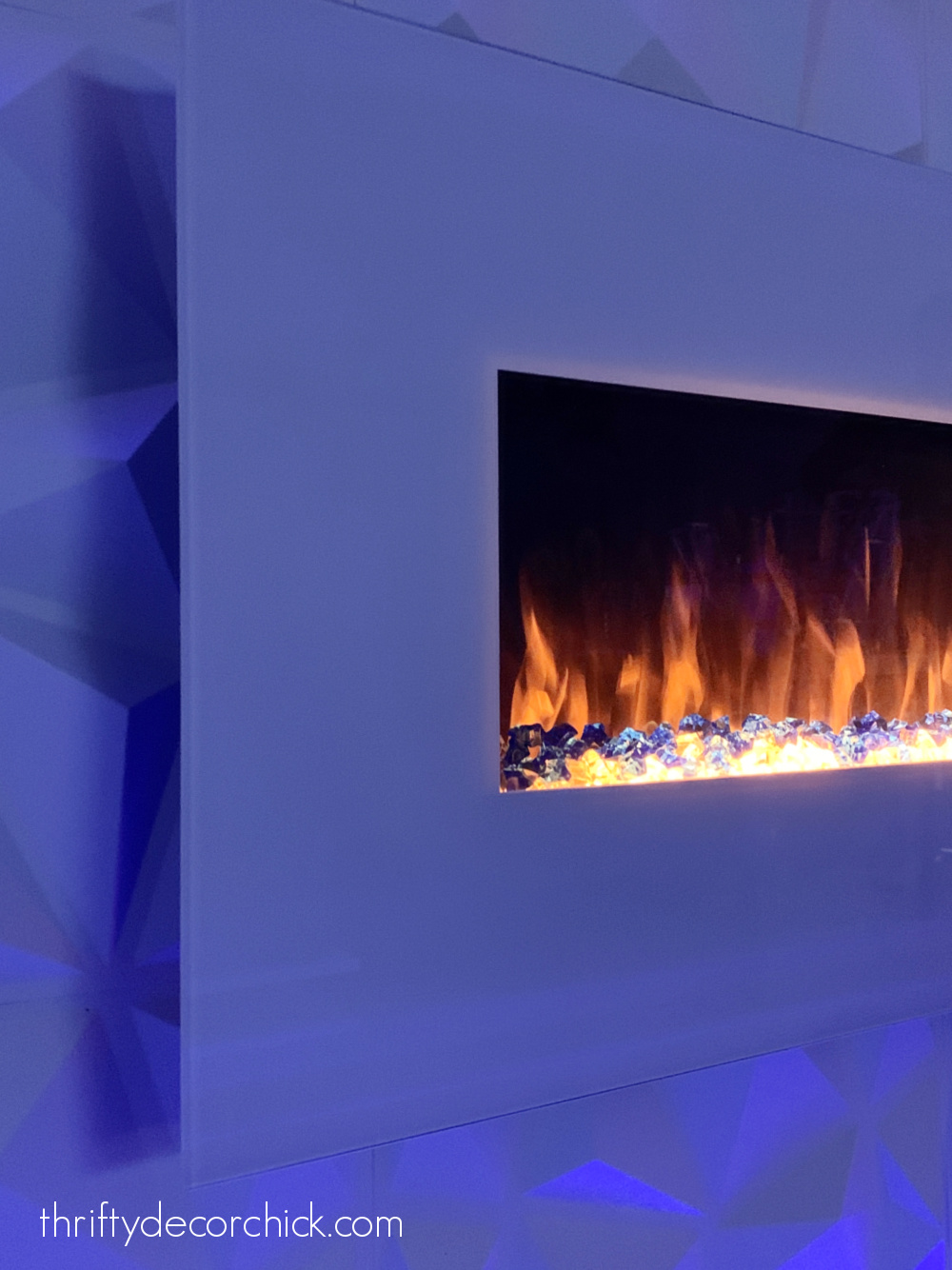 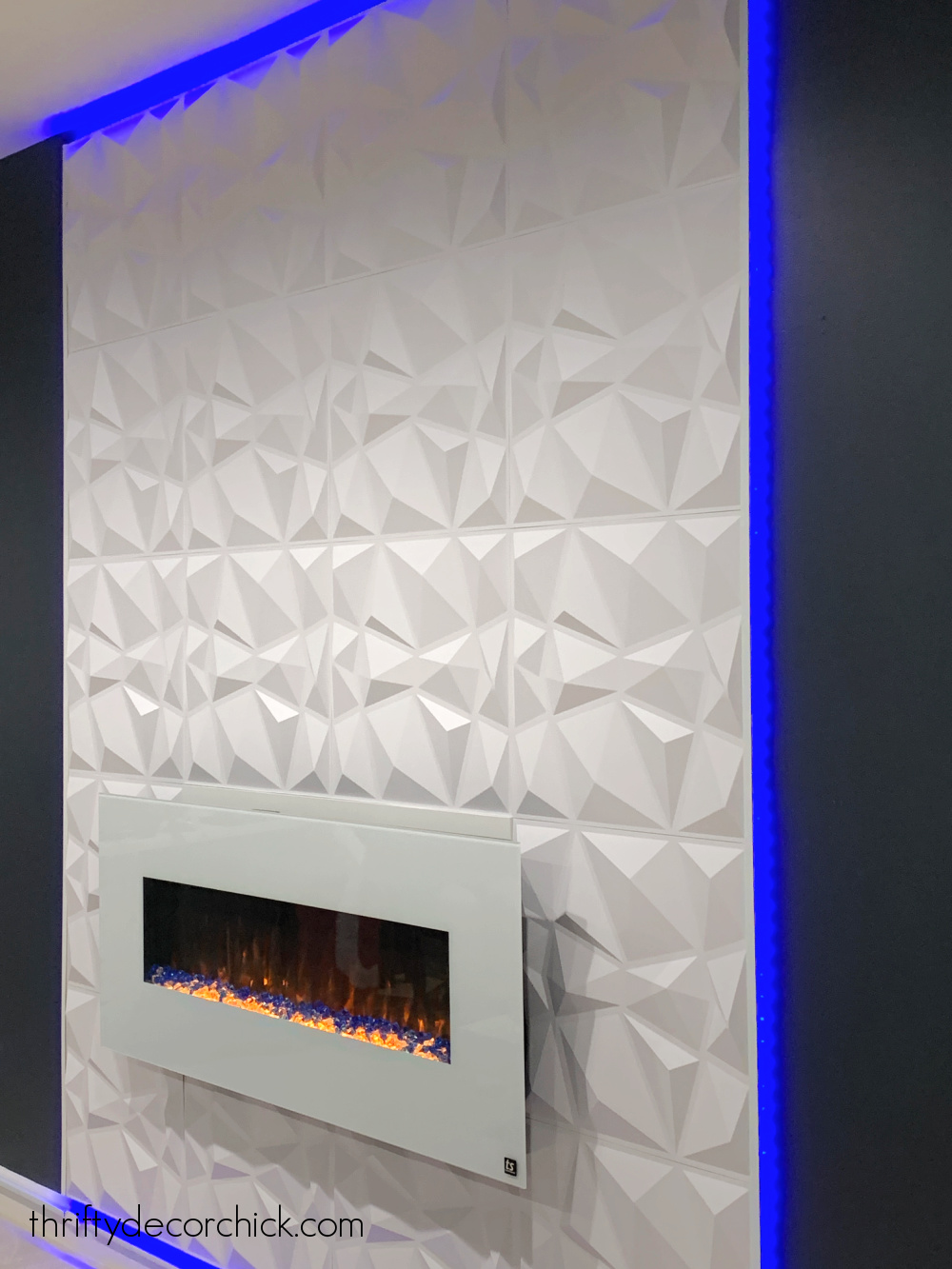 This cool, modern accent wall idea could be done anywhere — no fireplace or faux wall needed! If you place them directly on the wall you could easily add some simple trim around them to set it off even more.

There are so many possibilities with these 3D panels!

They come in a ton of designs and colors — blue, gray and black I believe. I saw that many spray painted them with success as well.

This project cost us $160 for the 1x2s, OSB panels, mounting tape, plastic trim for the sides and two packages of the plastic 3D panels.

Here are the items we used for this 3D fireplace wall: