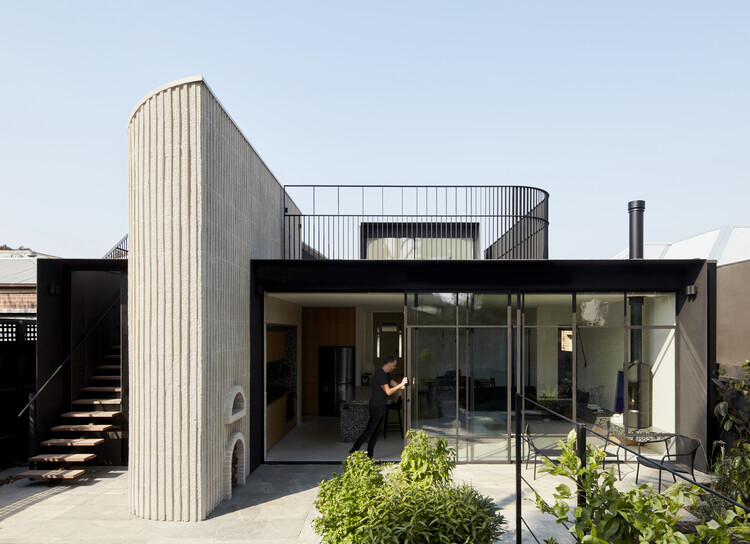 Text description provided by the architects. The core idea for the renovation of this dark and run-down Edwardian house was to maximise natural light.  The Client’s brief stipulated an efficient floorplan over a single level which prioritised ‘light and flow throughout’, ‘respect for the Edwardian features’ as well a preference for ‘curved edges’ and ‘real materials’.  The interrogation of this brief led to a strong passive design philosophy and further exploration of the core idea via strategically placed glazing and the effect of light on curved forms and carefully selected materials.

The house comprises of the renovated existing dwelling and a single-storey rear addition with a roof terrace. Key design interventions avoid following the archetypal formula of the renovated Edwardian or Victorian era home which often sees a hard delineation of new and existing, characterised by a rushed commute through the dark front portion of the house, to the light back portion.  In this project equality of amenity and materiality throughout the home is prioritised.

Inspiration was drawn from the existing site and surroundings to explore the effect of light on curved forms and textured materials.  A majestic Eucalyptus tree, ornate chimneys punctuating the skyline and the dramatic effect of the sun hitting the otherwise banal patchwork of corrugated roofs and fences are the critical influences which resonate throughout the home. Unencumbered by the constraints of a second level in a residential zone, the roof plane became a more dynamic device, enabling two key interventions which distil the approach of light, form and texture into a distinctive interior and architectural language to punctuate the home.

The first is the curved clerestory window which frames the entry hall and floods the existing portion of the home with light and a striking view of the Eucalyptus tree. The second is an expansive glazed northern façade anchored by a sculptural brick form.  The curved and vertically corbelled brick element is highly functional – internally, the form captures the kitchen, exhaust, air-conditioning, sliding door and laundry storage.  Externally it accommodates the pizza oven and flue, wood stack and garden storage while also acting as a balustrade and overlooking screen at the roof terrace level. This project was designed in collaboration with Beatrix Rowe Interior Design with the overarching concept developed together at project inception. The input of the Builder and Bricklayer also greatly enriched the design outcome, particularly in the case of the feature brick form.

Happily, constraints for this project were mostly limited to the ResCode standards.  With the Client’s budget and scope of works largely aligned, the challenges lay in the creative and effortless looking response to amenity impacts on neighbours.  The resolution of the roof terrace is a good example of this, where a sweeping screen of vertical steel blades graduates from open to opaque as overlooking zones dictate.  The effect of both the screen itself and the shadows cast is graphic and mesmerising as it changes in character and intensity over the course of the day – just as the internal spaces of the house do too.