Sahbi Sahbi, which translates to soulmates in Darija – a form of Arabic spoken in Morocco, is located in the Guéliz neighbourhood of Marrakech.

“It is a symbiosis of modernity and tradition, of Japan wood tradition and details and Moroccan motifs and materials.”

The eatery serves a menu of traditional Morrocan dishes made using recipes created by Dadas – female cooks in Morocco who orally handed down their trade through generations.

Sahbi Sahibi’s focus on Dada cuisine influenced Studio KO to create an interior that places the female chefs at the centre of the space.

“In Morocco, the kitchen is normally a secretive place, the hidden domain of the Dadas, women who hand down recipes from one generation to the next,” Studio KO said.

“It is with precisely this intention, to share and transmit knowledge – an intention evident even in the layout of the restaurant – that guests are welcomed at Sahbi Sahbi,” added the brand.

In the centre of the restaurant, the kitchen was intentionally left open so that diners can watch the chefs at work and get an insight into the culinary process.

Horseshoe-shaped tables and seating wrap around an open stove integrated into a kitchen island counter where chefs prepare meals.

“In conceiving this warm, convivial space, the designers inverted the archetype of Moroccan cuisine – its secretiveness – and instead placed the cooking at the epicentre of the restaurant’s activity,” said Studio KO. 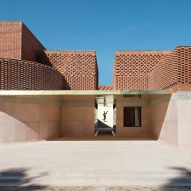 Earthy colours and natural materials were used to complement the relaxed and friendly aesthetic of the restaurant.

Wood was used to add warmth throughout. It covers the walls and ceiling and also forms the woven chairs and dining tables. These are illuminated with spherical pendant lights while brown leather upholsters the booth seating around the edge of the space.

In one corner, there is a large traditional oven where chefs can burn logs to bake bread or roast meat.

Finer details include rust-coloured ceramic urns, clay pots and pans and orange-brown paint in an alcove above a sink.

“The beauty is subtle: details, textures, the play of light and surfaces, natural tones and motifs that tell a story of traditional materials and knowledge, freely reinterpreted,” Studio KO explained.

Studio KO has previously worked on projects in Marrakech. In 2017 the studio revealed the Musée Yves Saint Laurent, a 4,000-square-metre museum building showcasing the work of the late fashion designer Yves Saint Laurent.

The photography is by Pascal Montary.