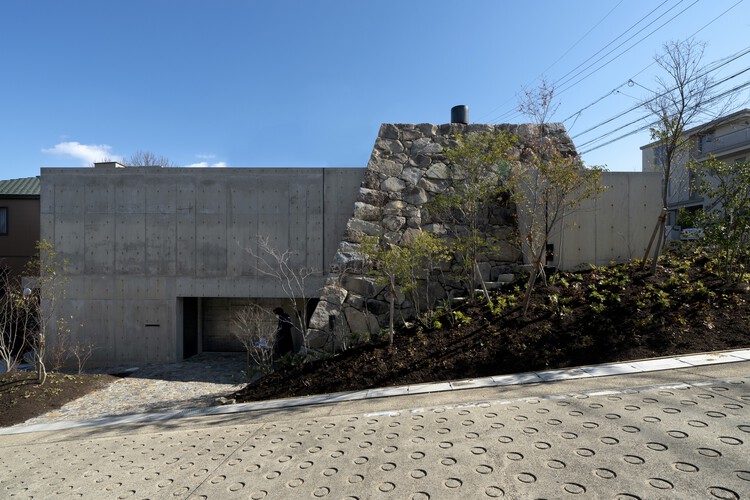 Text description provided by the architects. The site is located in an upscale residential area with lush greenery, with Nagoya University and Nanzan University within walking distance. I had designed a clinic for a client before, and this was my second commission. Therefore, I started the concrete design immediately without any time to warm up the relationship.

This project’s most significant request, or mission, was to use the traditional method of masonry called field masonry. In the beginning, I thought of it only as a finishing material. However, as I learned more about the traditional masonry method and its use, I gradually realized that I had not been thinking correctly, and I was at a loss for a while.

Originally, Japanese masonry was used for the foundations of castles, castle foundations, and stone walls. It was never meant to be a part of the architecture. The purpose and origins of the ruins were utterly different from those in South America. Therefore, there were no past examples to refer to. In addition, Japanese masonry has warped gradually as it was built up.

This is probably the most rational way of stacking masonry for its intended use in the long history of Japan. I felt pretty uneasy and uncomfortable about using this traditional Japanese masonry as part of a building with a different purpose. I couldn’t get rid of the awkward feeling that I was trashing the tradition, and a lot of time passed without being able to propose.

It was the pyramids of Tenayuca (Mexico) that brought me out of this impasse. It cannot be called architecture, but it is quite an architectural form compared to Japanese masonry. The moment I came up with the idea of recreating it with traditional Japanese masonry, the fog that had been hanging over the project instantly lifted, and I was able to proceed with the project smoothly from there. As a result, the first Japanese-method pyramid in Japan was completed here. However, the inside is not the sarcophagus room but the client’s study room.

However, after the start of the project, the masonry once again came back to haunt us. It was the overwhelming presence and reality of this masonry. Of course, the design had already taken this into account, but when we saw the huge stones in front of us, everything looked poor. The planned copper sashes were all replaced with voluminous iron and left in their bare black skin. Which also renewed the materials and details of the floor texture and hardware. The final result is quite different from the architecture when I signed the contract, but I think I was able to make the best choice flexibly by taking advantage of the fact that I was undertaking this project myself.

The overall plan is to give a feeling of openness to the room while protecting the private space by surrounding the two gardens, the water garden, and the courtyard, with a pyramid and a private space.