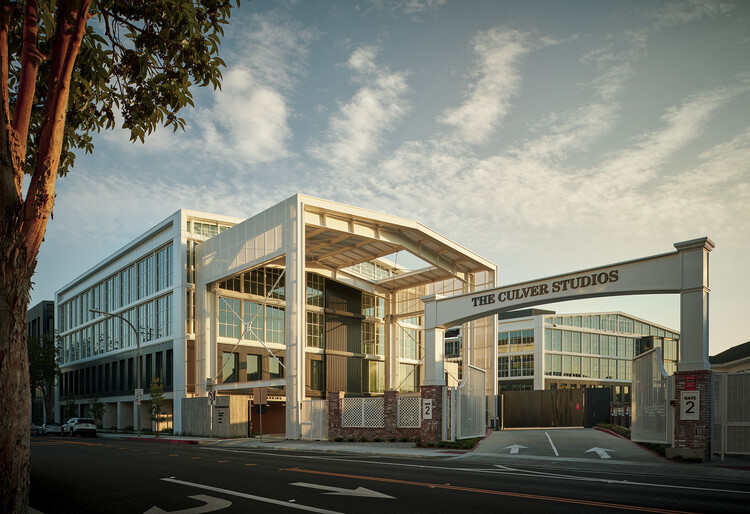 Text description provided by the architects. Typically, film studio lots are divided into a Front Lot and a Backlot. The Front Lot is an administrative workplace while the backlot is more utilitarian with an emphasis on supporting the creation of content. The master plan for The Culver Studios blurs and blends this distinction between the Front Lot and Backlot. This is done by creating a central in-between space called the Studio Core. This amenity-laden space comprises four new buildings that can function as both administrative workplaces and small studio spaces.

The blended Studio Core is the heart of The Culver Studios; it serves as a primer for the tenant’s social connectivity and collective engagement. This central common space creates opportunities for new and innovative collaboration within a variety of departments. It begins at the southern edge of the rear lawn, giving a transition from the communal scale to a more intimate scale. This corridor acts as circulation, though it feels like a destination.

It is filled with pockets ideal for quick meetings between friends passing by or impromptu brainstorming sessions between colleagues. Large communal tables give opportunities for working, casual dining, or relaxing. Large trees give canopies of shade for comfort. Modular paving and colored concrete underfoot linearly give continuity.

Terraces reinforce the relationship between the massing and the studio core courtyard corridor. The collision of a variety of activities in this central space blurs the distinction between studio production operation and the communal lifestyle supporting it.

Each building is envisioned to celebrate the massing elements that are historically rooted in building typologies typical of film studios: sloped and gabled roofs, utilitarian materials, and large volumes. They are intended to refer to the earlier historic stages and enhance the distinctive roofscape of the lot as seen from within the studio and from the surrounding neighborhood.

Other features, such as giant, signature “elephant doors” and large-scale openings are part of the industrial language of sound stages re-imagined for contemporary use. Buildings have a series of steel framed windows with a transom level of transparent glass above a higher set of translucent glass panes, giving the façade scale and variety.