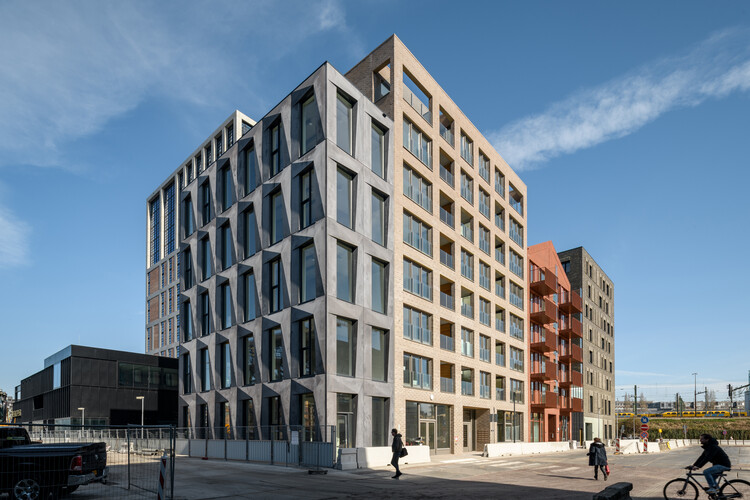 Text description provided by the architects. With the characteristic robust facade of the office building ‘The Modular’ Bureau Fraai refers to the ‘rich’ industrial past of the island and the billowing sails of the many VOC ships that were built at this location in the 17th century. Bureau Fraai was appointed by Stadgenoot Development to design a compact office building on a very narrow corner plot on the industrial Island of Oostenburg that is currently being transformed into a lively high-density mixed-use neighborhood.

The masterplan called for contrasting buildings with strong identities and an industrial character that builds on the island’s “rich” industrial past while in the 17th century, the shipyards of the Dutch East India Company were located in the exact same location. And in the following centuries, many locomotives and machinery were built in the still existing Van Gendthallen.

With the design of ‘The Modular’ Bureau Fraai refers to this industrial past as well as the production process of the building as in the aesthetics of the building facade. The five-story office building is therefore designed as if it were an industrial product easily assembled from different prefabricated parts. This results in a facade built-up from 25 identical prefabricated concrete facade elements that have been assembled at the construction site in a very short time frame.

With the design of this repetitive faceted facade, Bureau Fraai refers to the billowing sails of the tall ships that once sailed off from the island. And in addition to the fact that the facets also serve as shading devices, the continuously changing sun reflections, textures, and shadows result in a building that never looks the same at all. The majestic windows of the 5 office floors with a clear floor height of almost 4 meters offer superb views of the metropolitan surroundings.

The facades and open floor plans are designed to make the building flexible for different future programs, layouts, and users. With this flexible open floor plan, the high-quality façade, and the low energy use due to the heat pump system and the green roof, the building is able to meet the highest sustainability standards and tries to set the standard for the new lively mixed-use neighborhood of Island Oostenburg.