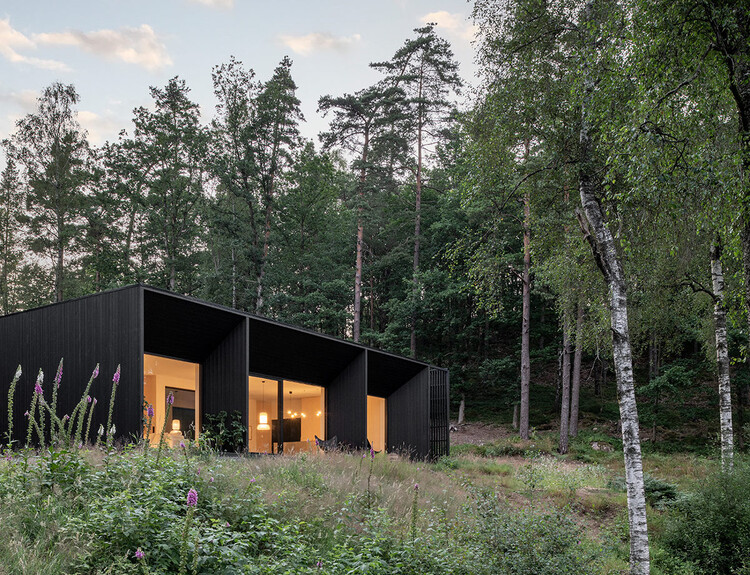 Text description provided by the architects. Situated in the rural surroundings of Gothenburg Villa Jägersro is discreetly inserted into the nature reserve of Vättlefjäll. The topography difference of almost 6 meters creates a dramatic approach to the home by emphasizing, and assuring the persistence of, the magnificent vista of the lake beyond.

A wooden trellis corridor leads guests down to the entrance level, acting as a transition between the parking and the landscape and again, framing the view. Upon arrival, internal large windows across the front façade blur the boundary between inside and out.

Inspired by the geometric rationality of Roman architectural Loggia, which acts as both practical and functional, Villa Jägersro’s facade towards the lake recreates the loggia. Triangulated pillars provide a convex, graphic shape and unique form while also encapsulating gutters that collect and disperse the rainwater from the flat roof. The form of the loggia provides shelter to an external decking, providing both depth and proportion to the façade.

Traveling within Asia, Europe, and the USA provided inspiration for an atrium plan form. The house, in a simple square form, is structured and organized around an inner courtyard further emphasizing this building’s connection with nature. The atrium is likened to a memorial of the existing ground.

Public and private spaces are physically and intentionally separated by a few steps. In addition, the public spaces, entrance, kitchen, dining, and living, are orientated adjacent to the dramatic lake view. Bedrooms, bathrooms, and storage are nestled into the back of the building, and thus the landscape with views into the depths of the forest.  The complex site orientation thus brings full meaning to the atrium, a hole in the middle not only aesthetic but functional through the addition of evening light to the middle of the volume.

An early sketch envisioned the house as an open and transparent glass volume inspired by a 60’s Californian residence that plays with the boundary of external and internal. However, after architects and homeowners, Saga and Edouard first camped on site and saw the thriller ‘The Signs’ (Mel Gibson 2002), their sketches developed and produced the thick walls providing safety in the dark and wild environment.

In the book ‘As little design as possible published in 2009, Dieter Rams from Germany writes “Having a small touch of color makes it more colorful than having the whole thing in the same color” In reference to the addition of red dots on the Tizio Lamp from Richard Sapper. Villa Jägersro however is one color; matte black. Stark contrast is created through the juxtaposition of the matte black façade and the natural and everchanging colors of the landscape. Thus, it is in fact more colorful within the wider scale of both the house and context.